The sporadic round-up of things I’m doing when I’m not writing…two weeks late because: kids.  I choose to pluralize the word because pets count as children.

Teen Mom…  I will admit that we are former Teen Mom watchers.  Before kids, it was so easy to get sucked into a Saturday marathon of that show.  I’d sit down after mopping (you know, giving the floor time to dry) and think I’d just watch the end of this episode.  But then I’d need to know if Kaitlyn and Tommy were going to stay together, or if Leah was going to get married again, or if Janelle was still with Kiefaaaah…and before I knew it, the sun was setting.  We gave it up after realizing our continued viewership was one of the driving forces behind the 17th season of the show.  Last week while flipping through the channels, Evan paused on MTV for a split second.  It was long enough for me to see that Teen Mom was on, and the cast that we had previously watched!  So we agreed to just watch a few minutes of the show.

While we were watching, I felt the need to adjust the color/tint/brightness on our TV.  Remember the old TVs with knobs, where you could adjust those things?  Bring it back, because today’s TV technology is not equipped to handle the spray tan/skunk hair that seems to be in style from Georgia to Kentucky. 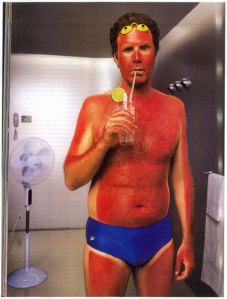 You should also know that I lost a good half an hour of precious napping/reading/blogging time just Google-imaging “bad spray tan.”  If you need a laugh, do that.

The Hunger Games: Craigslist Edition… Let me preface this by saying I’ve never read any of The Hunger Games books, nor have I seen the movies.  But, from what I understand, it’s the story of a contest/battle to the death over something.  Maybe food?  Saving the rain forest?  Not sure, but I needed an example you can relate to, and I know these young adult books are all the rage right now (barf).

Anyway.  Two weeks ago, we finally finished cleaning out the garage.  This is a project that started seven years ago when we bought this house.  That’s what happens when you pack up your existing garage and just move it 20 blocks south.  We had an old entertainment center that was in really good condition, but that I was too lazy to try selling or hauling to a thrift shop.  Enter the Craigslist Curb Alert.  Do you know about the Curb Alert?  If you want to get rid of something super fast, and you’re willing to just give it away, post it there.  People literally sit on their computers all day long waiting for things like foliage, old refrigerators, and 500 pounds of fill dirt to be posted.  Then, they obsessively respond to your posting until you email them back.

Case in point: I posted the entertainment center at about 10am.  At 10:07, I got the first of fifty-seven emails.  By 10:30am, I realized something very important: I had an extreme amount of power.  After reading every email, we decided to determine the winner based on grammar, spelling and punctuation.

Examples of phrases that did not win: “R U still gettin rid of ENT CTR?”, people who chose to type “gunna” in lieu of “going to” or “gonna”, people who responded with “GIVE ME YOUR ADDRESS” (note: I don’t just give out my address to randos, and you’re even less likely to receive it by typing in all caps), and people who emailed more than three times.

The winner composed an email with complete sentences that even featured punctuation.  After Evan spoke with him on the phone, he was awarded the prize…driving from North Fort Myers to mid-Cape to load this beast up in the back of his truck.  By lunch time, my driveway was empty.  It was awesome.

I continued receiving emails in the form of text/broken English for the next two days.  I love Craigslist.

The best way to end a weekend, ever…

Hi, I’m Kristin. This blog used to entail my amateur chef (read: cooking for free in your own kitchen) adventures, but then we became new parents and life changed, for the better. Now I write about the literal family circus, and finding balance as working parents. Enjoy the long-winded stories, rambling observations, overuse of punctuation, humor and sometimes recipes.

Rants and rambles about a mom's life

I Am Begging My Mother Not To Read This Blog
Family. Work. Life. Photography
PostSecret
momocular.wordpress.com/

because moms have eyes on everything